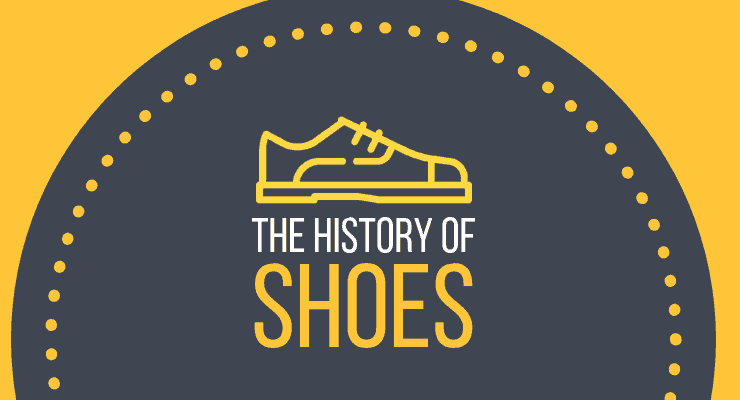 What’s the deal with shoes? As humans, why has it become the norm to always have something on our
feet as we walk around? The quick answer is protection, or maybe for the style. Sometimes we wear shoes for varying degrees of support, or for specific sports to try to gain an advantage over an opponent, or for fitting orthopedic devices to help with musculoskeletal conditions, and maybe for a bit of extra cushion and warmth. I guess there isn’t a quick answer to these questions after all, but what did we do thousands of years ago, before the age of the modern shoe? Our early ancestors did surprisingly well without footwear for many thousands of years. Our feet were able to handle the temperatures across sub-Saharan Africa, and we had thick, leather-like skin on the bottom of our feet to protect us from abrasions and lacerations while we hunted.

The History of Shoes

It’s hard to pinpoint when humans first started wearing shoes. That’s because most shoes back then were made of biodegradable material that didn’t fossilize; things like animal hide, grass, and mud. A rough estimate, however, can point to primitive footwear use between 3,500 to 10,000 years ago. Our use of shoes, in the beginning, was obviously very primitive – protect our feet from the elements. Wearing something on our feet helped to insulate from colder temperatures as we migrated out of Africa and started settling across Europe and Asia. History later showed that shoes became not so much a tool for protecting our feet, but a status symbol. Early Egyptians and Greeks used shoes to identify their social status. This continued until the Dark and Middle Ages when most shoes reverted to their original use – protection.

Flash forward to around the time of the American Civil War, and we can see that manufacturing
techniques improved greatly for footwear. Production of left and right shoes became standard practice, and leather became the material of choice for the upper portion of shoes.
The next leap forward in footwear design and manufacturing came when vulcanized rubber,
serendipitously discovered by Charles Goodyear in the 1890s, started to be used for the outer soles of sneakers. Combine that with the Spalding company’s manufacturing of the Converse All-Star sneaker for the new, and ever increasing in popularity sport of basketball in 1908, and you’ve got the beginning of the modern era of footwear.

These days we can look to technology to further our understanding of what makes a shoe functional, comfortable, durable, or supportive. We use activity-specific shoes now more than ever. A shoe for work, which is usually more fashionable and less supportive, is different than what we would normally use for tennis. The tennis shoe usually differs from the basketball shoe. All of these are completely different than a shoe used for soccer, or a shoe worn for hiking, or on a construction job. We even use different shoes for different disciplines within running – sprinting shoes look nothing like long distance running shoes, and function differently because of it.

The introduction of minimalist shoes versus a traditional running sneaker, both have benefits and disadvantages. With a traditional running sneaker, you’re including a lot of shock absorbency for your foot strike, which is usually made at the heel when wearing these types of shoes. This is combined typically with a stiffer midsole material to provide more support and control during mid-stance. And finally, at the forefoot of traditional running shoes are varying degrees of toe-spring, which can lessen the range of motion needed for the forefoot joints to go through during propulsion. One might argue, however, a lot of these functions and materials can act as a disadvantage. The first being the traditional shoe can promote an excessive heel strike at ground contact. Most people on this side of the argument note that our early ancestors used more of a mid-foot to forefoot strike while running and that this is a more natural way to run. Another argument deals with controlling the mid-foot too much; possibly reducing important muscle
function.

Which Shoes Are Best for Me?

The minimalist shoe proponents look to theories of proprioception increases, strengthening of the
arches in the feet, and lessening forces in other areas of the lower extremity; like the knee and hip joints due to the mid-foot to forefoot strike that these types of shoes promote. People against the minimalist shoe movement will bring back the arguments of lack of protection against most running surfaces in the modern age; like concrete. They’ll also bring up the increase in load forces on our fat pads that can bring about atrophy in these pads, and chronic pain because of it.

In the end, whether you’re wearing shoes for running or playing volleyball, going on a hike or at the office, they should be fitted properly and comfortable, and at the same time serve their function for that activity in an optimal way. Or maybe you want to ditch shoes entirely. Trying your luck at rewinding the clock to when we roamed the earth with nothing on our feet.

How Can We Help?

At the Arthritis and Injury Care Centre, we strive to help patients on their journey and provide them with the education and support they need. If you or a loved one would like more information on how we can help, please contact us for an opportunity to meet with one of our staff.