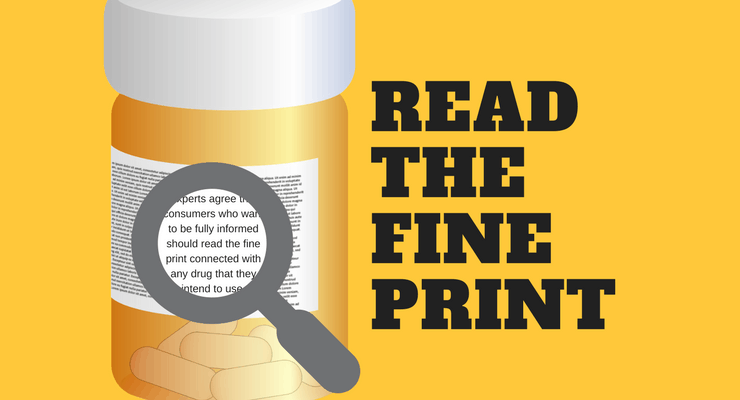 Pat awoke one recent morning with cold symptoms.  She reached into her medicine cabinet for a well-known over-the-counter cold remedy she had often used in the past.  An hour later, Pat was on the phone with her doctor describing in a panicky voice the heart palpitations, shortness of breath, and blurry vision she was experiencing.

It turned out that Pat, whose doctor had recently put her on a prescription antidepressant, was experiencing the frightening results of an interaction between the two drugs.  Fortunately, the effects were mild and wore off within a few hours.

Pat’s experience illustrates the value of reading the information that comes with all drugs, both prescription and over-the-counter medications. If Pat had read the circular that came with her prescription, she would have known not to take the sinus medication with her new prescription medication.

You see plenty of this type of medication information these days, because many manufacturers of prescription drugs regularly advertise in magazines, newspapers, television, and other media. Such information is also available with over-the-counter drugs and with any prescription drugs you may use.  Health Canada monitors regulations requiring which warnings about side effects and interactions must be included in advertising.  Your pharmacist should hand you an information leaflet with your new prescription every time.  If not, don’t hesitate to ask for it.

Are you supposed to read all of it?

Increasing numbers of consumers are asking that question these days.  In fact, the “fine print” is what’s officially known in the industry as “Prescribing Information” or “Patient Information.” It’s required by Health Canada to balance claims made in the actual drug advertisement.

Experts agree that consumers who want to be fully informed should read the fine print connected with any drug that they intend to use.

You can also use this information to learn:

This information might at first appear to be a bit frightening.  Health Canada regulations require drug advertisements to carry a list of every side effect that occurred during testing, whether it affected 25 out of 100 patients or just 1 out of 5,000 patients.

The patient information that accompanies a magazine ad for a typical drug might state that the drug can cause dry mouth, dizziness, blurred vision and even hepatitis, a sometimes-fatal liver disease.  That may sound like a good reason to avoid the drug, but you need to put the information into context, experts say. Given the right circumstances, every drug can causes side effects, even aspirin (ASA).  Under no circumstances should you use either drug advertisements or the package inserts that come with most medication to diagnose yourself or decide whether a particular prescription drug is appropriate for your situation.  If you are not sure if the information you read applies to you or want help interpreting what you read, be sure to ask your Physician/Clinician or Pharmacist.

New Health Canada regulations will help make it easier to read the fine print on cough syrup, allergy medication and pain relievers.  The change is for both prescription and non-prescription drugs, but it’s expected to have the biggest effect on consumers trying to select over-the-counter medication when it comes into effect beginning mid-2017.

‘We’re always worried about patient safety, so any way of getting this information better to our patients, is of course a win.’- Satish Mistry,  Westmount Place Pharmacy in Waterloo, Ont.

“Every product varies, you’re squinting at some, others are in big bold letters, it really varies by the manufacturer,” said Pharmacist Satish Mistry, who owns Westmount Place Pharmacy in Waterloo, Ont.

“So this will make sure all the information is in one spot, it will have the directions of use, the ingredients and any warning information the customers might need.”

The new packaging announced will feature a standardized drug facts table on the outer labels of non-prescription drugs, similar to the nutrition facts table on food said David U, president and CEO of the Institute for Safe Medication Practices Canada. The guidelines were developed collaboratively by Health Canada and the Institute.

“In the supermarket, you look at the back of chips … you see a table showing you some of the information which is easier and clearer to the consumer. We tried to do the same thing for, say, a bottle of acetaminophen.”

The new labels will also include recommended dosage and contact information for where to call if someone has questions or adverse reactions to the medication.

Overlapping Ingredients Can Be Toxic

Right now, one in nine emergency room visits are from people misusing medications, according to the Canadian Medical Association.

“The concern for pharmacists, or any health-care practitioner, is there’s products on the market that may have a different brand name but they have overlapping ingredients,” said Mistry.

By combining numerous non-prescription drugs, people may accidentally take dangerously high doses of certain medications — like acetaminophen, which is often included in cold and flu medication, cough syrups and used as a pain reliever.  Part of the problem, said Mistry, is people often don’t take the time to consult with a pharmacist, or other health-care practitioner, before selecting an over-the-counter medication.  The changes will make that information easier to access.

All new products will have to display the facts table by mid-2017.  Existing non-prescription medications will have until June 30, 2021, but Health Canada said individual manufacturers may choose to incorporate the tables sooner than that.

The dangers of drug dosing and interactions cannot be stressed enough.  Know what is prescribed to you and how and when to take it.  As always, never take more than the prescribed amount just because you think it will help.  Always consult your Physician/Clinician or Pharmacist before changing prescribed or over-the-counter medication amounts.